Set Up Laoniu Bridge, Connect the Way to Wealth

Not as magnificent as the rainbow,

Not as big and tall as the bridges spanning over rivers and lakes,

Yet still turns valleys and brooks into thoroughfare.

Kindness holds up one after one bridge;

The loving heart and comfort expected for thousands of years,

A convenience bridge that connects thousands of families,

And benefits all the people here.

The magnificence of rainbow is only a flash in the span,

But the bridge will stand forever;

And decorates a harmonious homeland.

Today, I walked on the bridge,

With happiness sweeping through my heart;

My descendants will also cross the bridge,

And fly their dreams to the future…

This is a folk song that outlines the “small but beautiful” creek bridge and reveals folk people’s ardent anticipation and gratitude for the convenience bridge.

In June 25-28, Yang Yuchun, Project Officer of our Foundation, revisited the Lao Niu Bridge projects in Shiquan County and Pingli County of Ankang City together with Jia Hao and Yu Ge, Philanthropic Specialist and Deputy Director of Project Department of Charity Federation of Shaanxi Province. They also conducted project research on the need for the construction of creek bridge in Luonan County of Shangluo City. 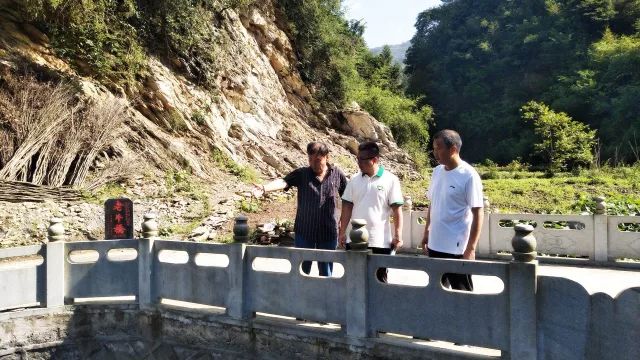 Two years ago, there was only a simple bridge formed by several crosspieces above the river in Maoergou Village, Chengguan Town, Liping County. At that time, villagers had to walk through the mountain road a few miles away to bring back food and children had to cross the river on the dangerous bridge. All those inconveniences not only caused safety hazards, but also stopped local people from making more money.

Former site of the creek bridge in Maoergou Village

The construction and completion of No. 83 Lao Niu Bridge opened up the “dead end road” of the village and became the only way that connects the 551 people from 158 families in the two villages and the operation of over 500 mu land around the area, providing safety guarantee for villagers going out and children going to school and opening up the path for villagers to achieve prosperity through farming, harvesting and selling food.

There are now 104 similar bridges in 31 banner counties and 97 remote poverty stricken villages from 10 provinces (autonomous regions) all over China. The project practically improves the poor traffic environment in poverty-stricken areas, solves local people’s difficulties in traveling, and directly benefits over 180,000 people. To be precise, 18,837 people from 5,993 “targeted poverty alleviation” families.